The series is yet another homage to the female sex by Perez--this time to the struggle with powerful emotions, tensions and conflicts that women  who find themselves in the role of mother and homemaker must suffer.

Now settled permanently in the U.S., German Perez began to paint large scale and evolved his own mature language, a style that he called Caribbean Pop , a number of works captured the clash of cultures between theTainos and the Spanish missionaries

Yet here myth and reality converge. Perez finds an ideal theme---the mass migration of Dominicans to the US---to translate his mythico-historical interests into contemporary terms.  life.

Inspired by their worldview, Perez re -imagined the Taino in the series.... People from the Sea, which reinvented the New World in a personal mythology.  Here a hybrid, primordial race thrived, crossings boundaries of nature, time and space.

People from the sea

The Devil and the sea

"The magical world of German Perez brings to mind the beauty of his beloved Chagall glossed with a Caribbean palette. His imagination as an artist lifts us to the unexpected, but his grounding as a Socially conscious and caring man settles us back to earth with a gentle hand. I love looking at his work." 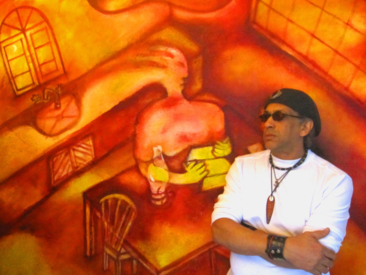