Dominican painter German Pérez is considered one of the leading exponents of the island’s 1980s artistic scene, leading him represent the country at European biennials held in France, Norway, Spain and Hungary. A graduate in architecture, he experimented with a wide range of visual media like photography, drawing, sculpture and graphic art, and these techniques have featured in several phases of his artistic work.

In 1983 he moved to New York City, where he became involved in the Pop Art movement, exhibiting his work in Soho alongside artists like Andy Warhol and Jean Michel Basquiat. As a result, one year later he represented the Latino community with a solo exhibition in the lobby of the World Trade Center in New York, in a celebration of diversity.

In the course of his career, German Pérez has held a total of 28 solo exhibitions in several cities and countries, including New York and Los Angeles, Brazil, Panama and Belgium. His pictorial body of work can be found in public and private collections, including those of international ballet dancer Mikhail Baryshnikov, Punta Cana founder, the late Theodore Kheel, world famous Parisian chef Alain Ducasse, and other prominent figures.

In addition, writers of the caliber of Julia Alvarez, Kathy Engel and Sergio Troncoso have chosen his work to illustrate the covers of their novels and poetry collections published in the US. 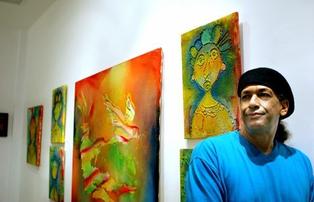